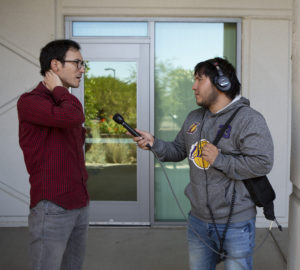 I came in into Next Generation Radio hearing that the program would “change my life.” I thought that was a bit dramatic, to say the least. I was confident with my skills as a journalist going into the week (I have won awards for my reporting) and figured I would breeze through the program.

But I didn’t have a moment to rest. My interview fell through before the week began. I had no idea how I was going to find a new story about an immigrant’s first days in America, especially since I had never been to the Meadowview neighborhood.

I met my mentor, Devin Katayama, the day before the program began. I thought he was kinda geeky looking. But as long as he didn’t get in the way, I would be able to finish my tasks fast, I thought. I could do it all on my own. All this cockiness and bravado I came in with was humbled over the week. I realized I wasn’t even close to the best at anything.

Devin learned quickly that I wasn’t the best team player and he made sure I stayed with the program. I don’t think I could have had a better mentor for the week. He showed me how to record and produce audio and how to be a better reporter in a very unique way. He was blunt and let me figure things out when I wanted my hand held. He never let me fall back into the lone-wolf style I’m comfortable with.

The other mentors were equally as fantastic. They had years of knowledge from every corner of the journalism world. There are too many people to name but I am so happy to be a part of the Next Generation Radio newsroom. It feels like I found a family of people who have a love for my passion.

The laughs, hard work and enthusiasm in the room were infectious all week long. I didn’t want to let anyone down so I gave it my all. Even when my old habits told me to do everything on my own. It was impossible. I had to rely on someone other than myself for once. It was a hard adjustment but I’m glad I made it. I trust everyone working in this program and would work with them again without a second thought.